Combat Storm is a rule set produced by Strategy Wave Studios. It is designed for two to four players, ages 12 and older. Combat Storm is a turn-based tactical wargame, intended for use with plastic Army Men as miniatures. The implied scale is 1:35 or 54mm, i.e., one inch of tabletop represents three feet in the game.

The rules are available at combatstorm.com. The rulebook retails for $22.99 U.S., but for an additional $7 U.S. you can purchase a boxed set including the rulebook, about 60 Army Men of various poses and colors, and four vehicles: a main battle tank, a light tank, a self-propelled artillery vehicle, and an air defense/ground support vehicle. Purchase of the rulebook, whether in the boxed set or by itself, grants access to the online Combat Storm Player Portal, through which you can subscribe to newsletters, download exclusive content like print and play tokens for identifying squads and troop states or papercraft terrain, and access utilities such as an army builder tool. You can also purchase additional Army Men, armored vehicles, dice, and additional paid papercraft downloads on the Combat Storm site.

This review describes the boxed set, including a review of the rules. END_OF_DOCUMENT_TOKEN_TO_BE_REPLACED

Our first video in a really long time. Sure feels great to be back in the swing of things. 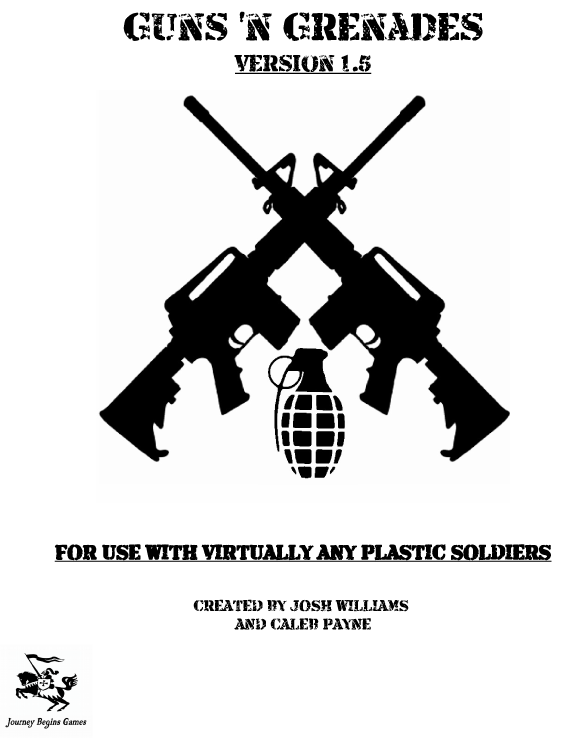 A new edition of Guns n’ Grenades was recently released by Journey Begins Games, and authors Josh Willaims and Caleb Payne revised the rules into a simpler, streamlined game with a great deal of flexibility. The game is a tactical level, turn-based, miniature wargame designed for 54 mm scale. The best part is that the new edition is available as a free download!

END_OF_DOCUMENT_TOKEN_TO_BE_REPLACED

Recently, we purchased a Military Watchtower Fence and Tree Playset (those exact words were in the item description) on eBay. It took just over two weeks to ship from China – not too bad for having to cross an ocean – and the box arrived today.

For a cost of $4 U.S., I received a plastic watch tower, two interlocking fence sections and a ridiculous-looking plastic tree. The pieces were further out of scale than I expected; the fences were higher and of heavier gauge plastic than a typical 54mm piece, while the tower was much smaller, looking better scaled for 1:72 “mini” Army Men.

Fortunately, these aren’t pieces I expected to use as-is. The tower arrived disassembled, so I’ll just keep the support structure and platform, while building a better-scaled guard shack and roof for the upper section. The fences could probably be used as-is, but I think I’ll dress them up a bit with additional barbed wire. The soldier that came with the tower will be discarded, and I may try to improve the tree by painting and applying flock.

All told, $4 is a small price to pay for base materials for two or three small terrain projects, so the purchase was worth the effort.

It’s been quite some time since we’ve posted a video. This time, it is a quick review of the Concrete and Plastic Barrier Set by Meng. A pleasant surprise was that the set actually included a mold for creating these road barriers from gypsum or casting plaster! The review of the set is followed by a quick tutorial on casting barriers from plaster. If you obtain the set or have any ideas that should be added to the tutorial, please let us know in the comments. 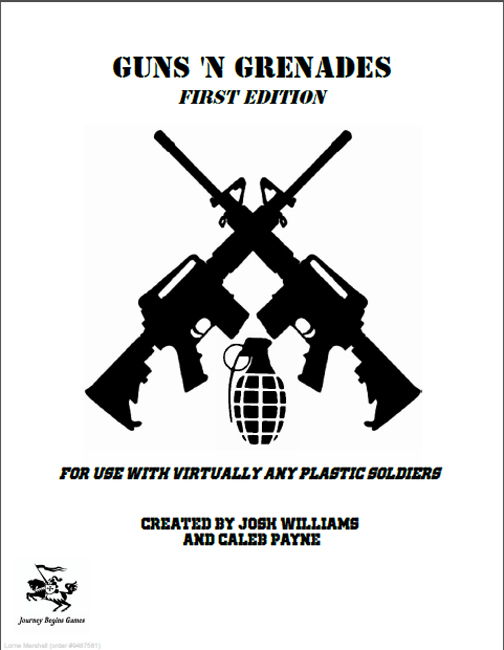 Editor’s note: the designers of this game have released a v. 1.5 of these rules, which we recommend. You can read the latest review here. In addition, the designers have chosen to make the current rule set available as a free download! You can download those rules here.

Guns ‘n Grenades is a downloadable, tactical rule set for wargaming with 54mm plastic army men, retailing for $1 U.S. The rules are simple – only 11 pages in length, including numerous illustrations – but they make for a quick and cheap game.

The mechanics are easy enough; roll one six-sided die, add your attack or defense modifier (depending on what your troops are doing), and compare it with your opponent’s score. If the attack roll is higher than the defense roll, a hit is scored.

Soldiers each have four stages of life in this game: healthy, wounded, bloodied, and dead. When a soldier is hit, he usually loses one stage. The authors recommend using slips of paper to identify wounded or bloodied targets.

Plastic soldiers are divided into types, based upon the way they are sculpted. For example, a figure holding an assault rifle is a common rifleman, while any figure aiming down the sights of his weapon is considered a sniper. The authors even found a use for that officer-style pose with the pointing arm – they are scouts. There is a total of nine soldier types.

END_OF_DOCUMENT_TOKEN_TO_BE_REPLACED

We’ve added another unboxing/review video to the Army Men Wargaming YouTube Channel! This clip is a close look at the Ninjas vs. Pirates Battle Figures Set by Imperial Toy, LLC. While not exactly the first image that comes to mind when thinking of Army Men, there are some quality sculpts in this 90-figure, 54mm set, which retails at $3 to $6 U.S.

Budget Battle, a free, downloadable rule wargame set designed specifically for these sets, is reviewed here. We designed a set of print-and-play tokens for Budget Battle, which are available for free download here.

If you play this game and determine a victor in the Pirates Vs. Ninjas saga, please tell us about it in the comments! 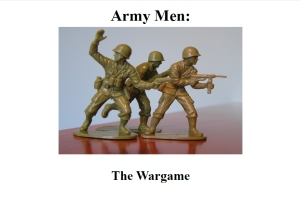 Army Men: the Wargame is a 16-page rule set available in .PDF form which is priced at $3 U.S.

The rules don’t expressly state scale, but the rules refer to “soft plastic green and tan Army Men,” implying 54mm scale. If you plan on using the increasingly common “mini” 28mm Army Men, cutting all movements and ranges in half would probably work.

Overall, this game is a collection of outstanding concepts, weighed down by clumsy, sometimes self-contradictory mechanics. It reads like – and played like – the beta version of what I thought I was buying when I downloaded the game.

Troops are assigned point values based on weapon type, but points can also be spent on troop qualities and upgrades (like leadership, battle hardened, or body armor), vehicles, and even fortifications (like sandbags and foxholes). The army building process is a list builder’s dream.

END_OF_DOCUMENT_TOKEN_TO_BE_REPLACED

Released in 2007, John Bobek’s The Games of War is a comprehensive collection of more than 30 individual wargame rule sets, with ground battles ranging in scale from 2mm to 54mm, along with air and naval rules. Historical periods covered range from ancients through futuristic space combats. The book also includes a set of overall judge’s guidelines, a glossary of wargaming terminology, numerous period-specific bibliographies, and a rare outline of how World War II armies were commanded, supplied, and equipped.

On the whole, the rules are of moderate complexity; nothing as simplistic as many of the free rules sets available, but nowhere near as complex as Advanced Squad Leader or even Bolt Action. The rules are d6-based, were heavily play-tested by the author, his friends, and his students, and are very well balanced. The layout of the book, however, leaves so much to be desired that we don’t recommend paying retail price for the text.

END_OF_DOCUMENT_TOKEN_TO_BE_REPLACED

The book begins with a chapter on wargaming, obtaining and preparing miniatures, and obtaining or making terrain. The next several chapters treat each historical period in turn, first with a brief overview of the historical period in question, the major types of units fielded by armies at that time, and a brief outline of tactics used by those units; after that introduction, the following chapter states the actual rules Thomas devised for that period. Thomas then details 30 wargaming scenarios adaptable to any historical period, followed by chapters on campaigns, solo wargaming, and reference material. The text retails for $15 to $25 U.S., and used copies are available for as little as $10.

The rules are, with the exception of the World War II set, not scale-specific. They are more operational in nature, i.e., these are platoon- or company-level rule sets, and they are designed to be played on a 3′ x 3′ tabletop. Uniquely, units don’t roll to hit each other under these rules; hits are assumed to be happening, as units are close enough to hit each other. Rather, units inflict variable casualties on each other each turn, modified by terrain or troop type; any unit can absorb 15 points of damage, then its morale breaks and it ceases to be an entity on the battlefield.